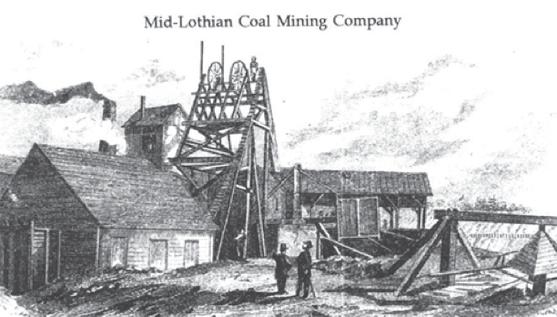 Rescuing miners almost overcome by back damp on Saturday, Feb. 4, 1882

Early History of the Grove Shaft 1836-61
The Grove Shaft plunged 625 feet and took workmen three years to dig. The Wooldridges employed 150 men and boys. Twenty-five mules stabled underground pulled coal carts on an underground railroad. Workmen, – white, free black, slave and boys as young as eight labored together using picks and shovels to dig and load the coal. They worked in two 12-hour shifts, 6 a.m. to 6 p.m. and from 6 p.m. to 6 a.m., six days a week. A company hospital, manned daily by three local physicians, attended to the miners’ health needs.
Steam engines raised the coal in corves (coal buckets), that were dumped into cars of the Chesterfield Railroad. This gravity /horse-drawn railroad, Virginia’s first, carried approximately 200 tons daily down to the James River wharves in Manchester in south Richmond. The coal was shipped to ports such as Washington, Baltimore and New York. It was used in blacksmiths’ forges in the production of gas and coke, and in the manufacture of iron, glass, copper and chemicals, as well as being a source of energy.

Later History of the Grove Shaft 1861-82
The Civil War increased the demand for local coal. From 1861-65, the Richmond & Danville Railroad hauled Mid-Lothian Company coal to the Tredegar Iron Works in Richmond to burn in casting cannons for the Confederacy. Mining slowed after the end of the Civil War in 1865. Confederate veteran William B. Wooldridge failed in his postwar effort to issue stock to reorganize the Mid-Lothian Coal Mining Company. R.S. Burrows, his creditor from New York, took over to rework and reopen the mines. Tragedy struck in February 1882, when an explosion at the Grove Shaft entombed 32 workmen.

The Grove Shaft Explosion
On February 3, 1882, a violent methane explosion trapped 32 men in the Grove Shaft. Miners from nearby Etna pits, the Deep Run pits in Henrico County and the Clover Hill pits, plodded through the snow to assist mine superintendent George Dodds in several futile rescue attempts.

Dr. Philip S. Hancock, a local mine physician, organized a relief committee to appeal to the public for donations. With the help of members of Jerusalem Baptist Church, known now as Winfree Memorial and the Midlothian Masonic Lodge, the group raised funds to assist the miners’ families for many years with donations of food, rent money, fuel, clothing, school supplies and other necessities. 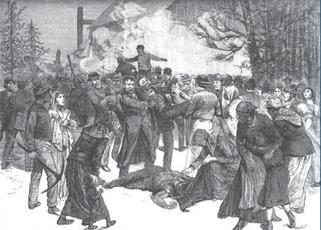 Exhibit #3: The Grove Shaft Mine