Formation of Coal as a Fossil Fuel
Coal in the Richmond Basin is an upper Triassic formation, compacted more than 160 million years ago. At that time, the Richmond area was a dense warm lowland forest/swamp of huge green trees and plants growing beside rivers, lakes and marshes bordered by granite hills.

In this tropical forest grew giant pine-like trees with tall rushes underneath. Living in the warm swampland and waters were small lizard-like dinosaurs and ancient fish. As the animals, trees and plants died, they fell into the swamp and decayed. New animals, trees and plants grew on top of the old. Over millions of years, sediment, silt, sand and other mineral matter brought down by rain, rivers and streams covered layers of decaying matter. As mineral matter increased, some of it developed into sandstone and shale. These accumulating layers slowly compressed to form the coal bed.

Paleontologists have found evidence in the shale and coal deposits that dinosaurs and crocodile- like creatures lived near Midlothian. Remains of early mammal-like reptiles and fish are among the most recent fossil discoveries. Petrified trees and giant rushes have been found in the Basin’s sandstone beds.

The Mid-Lothian Mines Park is in the heart of Midlothian’s coal mining past and is encompassed by the Richmond Coal Basin. Mining in the Midlothian area of the Basin represents the first attempt at commercial coal mining in North America. The Mid-Lothian Mines probably gave the village of Midlothian its name. The Richmond Coal Basin runs north and south and is approximately 33 miles long and 5 to 10 miles wide. It encompasses about 150 square miles in the counties of Henrico, Goochland, Hanover, Chesterfield, Powhatan and Amelia. The Richmond Coal Basin crosses the James River west of Richmond and the Appomattox River at its southern tip. Its bituminous coal seam, 5 to 50 feet thick, rests on an oblong granite basin. 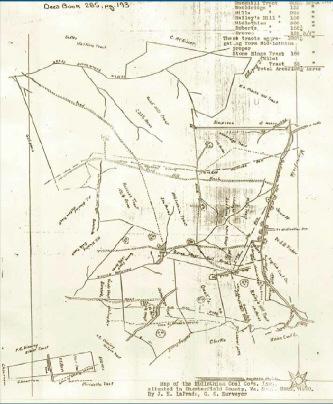 Next: Exhibit #2
View on Mobile