The iron ladle (top) and crucible that

where used in the coal mining process.
Images courtesy of Chesterfield Historical Society of Virginia, via Chesterfield Parks and Recreation.

Outcroppings of coal along the south bank of the James River in what is now Powhatan County were discovered circa 1700. A hunter from the nearby Huguenot settlement, Manakintown, dislodged lumps of coal as he slid down the riverbank to retrieve his quarry. Soon, nearby landowners began searching the area for coal outcroppings and deposits.

The earliest record of coal mined in the United States was that of a coal pit operated on the headwaters of Falling Creek near present Midlothian in 1737. Among local collieries working in the coal basin in the 18th and 19th centuries were Black Heath, Mills’, Trabue’s, Cunliffe’s, Railey’s, Brummall’s Blunt’s, Aetna, Gowrie, Stonehenge and Mid-Lothian.

There were four shafts, 11 by 11 feet square producing about one million bushels of coal yearly. The Mid- Lothian shaft (later known as the Pump Shaft), one of the most productive, was flooded following a disastrous explosion in 1855 that killed 55 miners. After several unsuccessful attempts to pump out and rework this once preeminent shaft, it was abandoned. 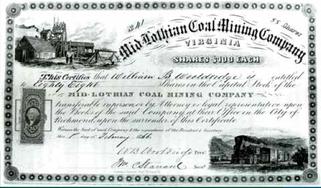